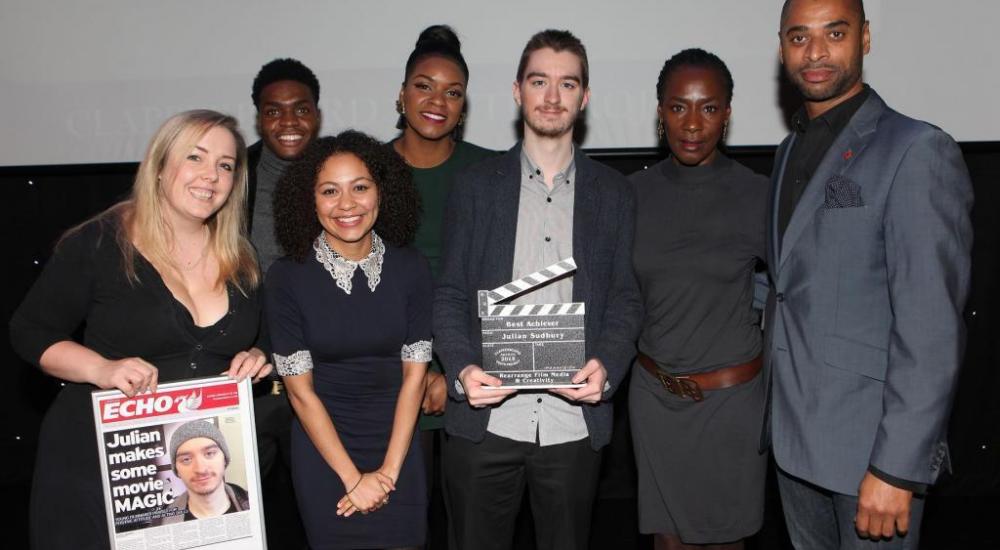 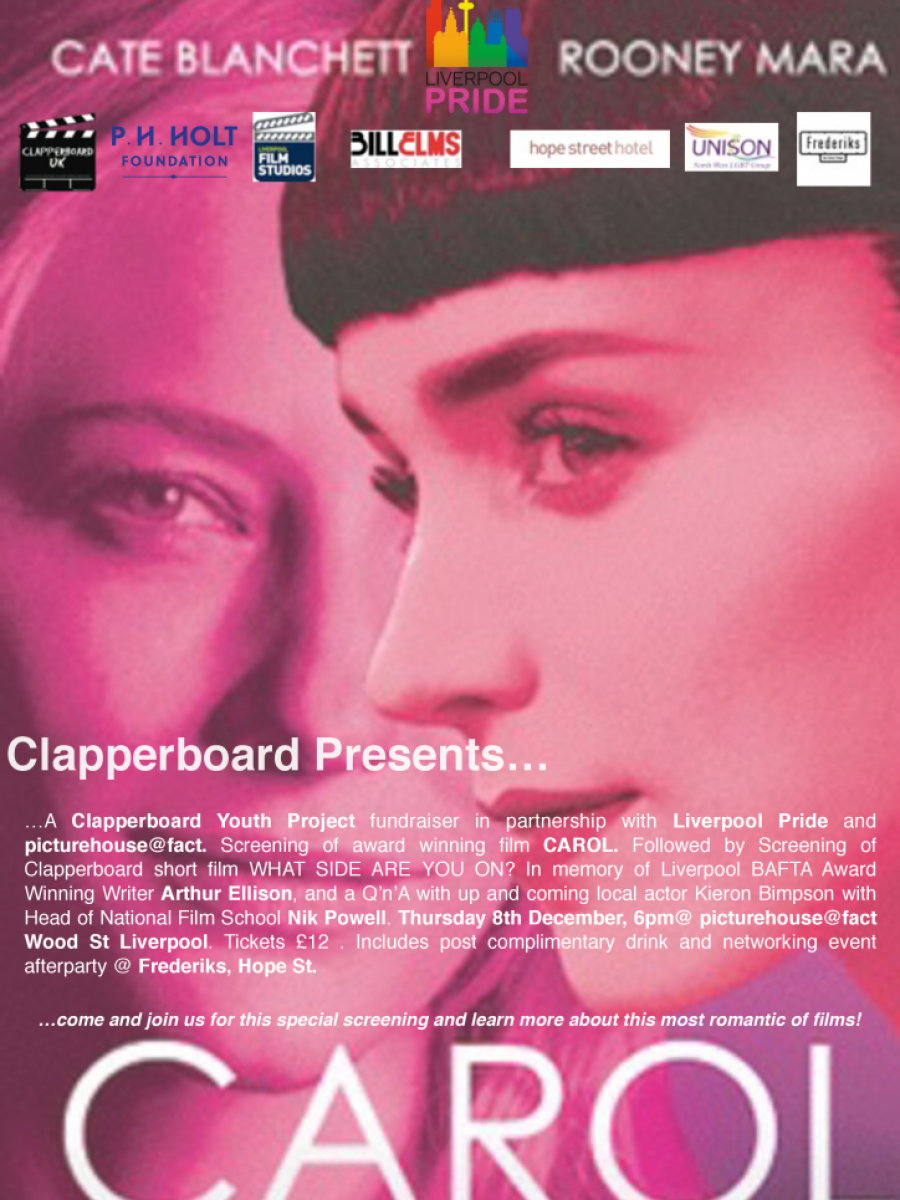 In partnership with Liverpool Pride and picturehouse@fact

Followed by a screening of Clapperboard short

WHAT SIDE ARE YOU ON?

Followed by a Q & A with Liverpool actor Kieron Bimpson, Chaired by award winning Producer and Head of the National Film School, Nik Powell..

Clapperboard UK is pleased to announce a special fundraising screening of award winning feature film CAROL in partnership with Liverpool Pride. CAROL tells the story of a young woman in her 20’s, Therese Belivet (Rooney Mara), a clerk working in a Manhattan department store and dreaming of a more fulfilling life when she meets Carol (Cate Blanchett), an alluring woman trapped in a loveless convenient marriage.

There will be a special screening of Clapperboard short WHAT SIDE ARE YOU ON? in memory of BAFTA Award winning Liverpool writer Arthur Ellison (Brookside, The Street, Accused and Moving On) who worked on the film’s script with young film-makers from The Academy of St Francis of Assisi. Actor Kieron Bimpson will participate in a Question and Answer discussion with audience Chaired by award winning Producer and Head of the National Film School Nik Powell (Company of Wolves, Mona Lisa, Fever Pitch, Twenty Four Seven). Kieron will talk about his journey from a young drama student to fulfilling his dream as an actor with parts in BBC’s Justice, ITV’s Vera and Gary Oldman’s new feature film Hunter Killer due for release in 2017.

Jimmy McGovern said“Arthur Ellison could talk for England. One night he got his jaw broken in a fight outside a pub, that shut him up for a while and, unable to speak, he resorted to writing. It was good so he kept at it. He wrote for Brookside, Hollyoaks, The Street, Accused and Moving On. His scripts were always about real people facing real problems in real streets, always full of humour and passion and energy. He was a wonderful storyteller.”

Nik Powell said“I am delighted to be involved in a small way with Clapperboard, a project which clearly enables people’s lives in a big way”.

Kieron Bimpson said“it’s fantastic that Clapperboard can help give young people like me opportunities to work in the film and TV industry . Maureen Sinclair and Colin Farrell have always been there to encourage and guide me along with my drama teacher at the Acadamy, Nicola Ousey. Arthur was just brilliant to work with during the production of our short film with Clapperboard. He helped us all understand dialogue and made the whole script writing process fun”.

This special Christmas event is supported by Liverpool Pride & Unisen, PH Holt, Liverpool Film Studios, Hope Street Hotel, Frederiks, Bill Elms Associates, will take place on Thursday 8 December, 6pm with a special screening of Clapperboard short What Side Are You On? in memory of Liverpool BAFTA winning scriptwriter Arthur Ellison (Brookside, The Street, Moving On).

Clapperboard UK Ltd is a non profit making charitable organisation and has worked successfully with more than one thousand young people between the ages of 7-25 across the North West bringing creativity into their lives.

Clapperboard aims to encourage young people to express them-selves through the medium of film and help them seek career opportunities in the creative industries that might not otherwise be available to them. The project has now run for twelve years and has received many Festival awards (national and international) and acclaims from some of the biggest names in the entertainment industry, including Liverpool Echo’s prestigious Pride of Merseyside Award for Best Community Event 2014.

In order to continue its outreach work, Clapperboard UK need your help. You are invited to attend the special screening on Thursday 8th December at picturehouse@fact Wood Street, Liverpool, to help the project carry out its goal of reaching out to as many young people as possible. There is a limited number of tickets at £12 per ticket, which includes a complimentary drink at post-reception held at Frederiks, Hope Street. Tickets on sale at picturehouse@fact box office, 88 Wood Street, L1 4DQ, tel. 0871 902 5737.

CAROL & WHAT SIDE ARE YOU ON?

Income raised from this Clapperboard Presents… fundraiser will go directly toward the Clapperboard Youth Project.